Nobody flew- they just fled

An excerpt from “The Warmth of Other Suns” by Isabel Wilkerson.

from The Warmth of Other Suns by Isabel Wilkerson.

After the Civil War and Reconstruction, the plight of blacks in America got decidedly worse, with voting rights effectively removed and economic opportunities vastly curtailed. Then came the First World War, which brought accelerated demand for industrial production in the factories of the northern United States, and an opportunity for “escape” for Southern blacks:

"[Blacks] fled as if under a spell or a high fever. ‘They left as though they were fleeing some curse,’ wrote the scholar Emmett J. Scott. ‘They were willing to make almost any sacrifice to obtain a railroad ticket, and they left with the intention of staying.’ … They were all stuck in a caste system as hard and unyielding as the red Georgia clay, and they each had a decision before them. …

"It was during the First World War that a silent pilgrimage took its first steps within the borders of this country. The fever rose without warning or notice or much in the way of understanding by those outside its reach. It would not end until the 1970s and would set into motion changes in the North and South that no one, not even the people doing the leaving, could have imagined at the start of it or dreamed would take nearly a lifetime to play out. 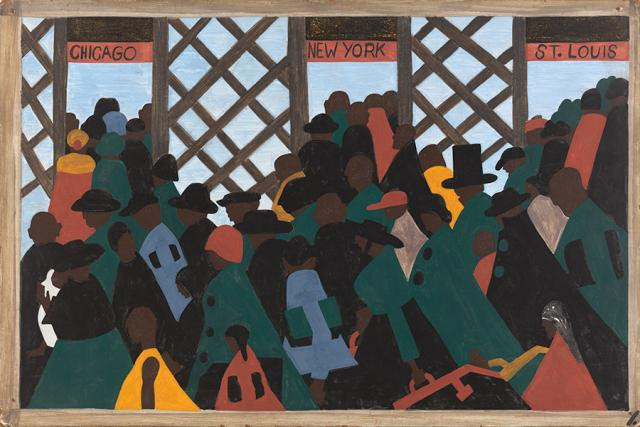 Panel 1 from Jacob Lawrence’s Migration Series (1940-41)
"Historians would come to call it the Great Migration. It would be­come perhaps the biggest underreported story of the twentieth century. It was vast. It was leaderless. It crept along so many thousands of cur­rents over so long a stretch of time as to be difficult for the press truly to capture while it was under way.

"Over the course of six decades, some six million black southerners left the land of their forefathers and fanned out across the country for an un­certain existence in nearly every other corner of America. The Great Migration would become a turning point in history. It would transform urban America and recast the social and political order of every city it touched. It would force the South to search its soul and finally to lay aside a feudal caste system. It grew out of the unmet promises made after the Civil War and, through the sheer weight of it, helped push the country toward the civil rights revolutions of the 1960s. 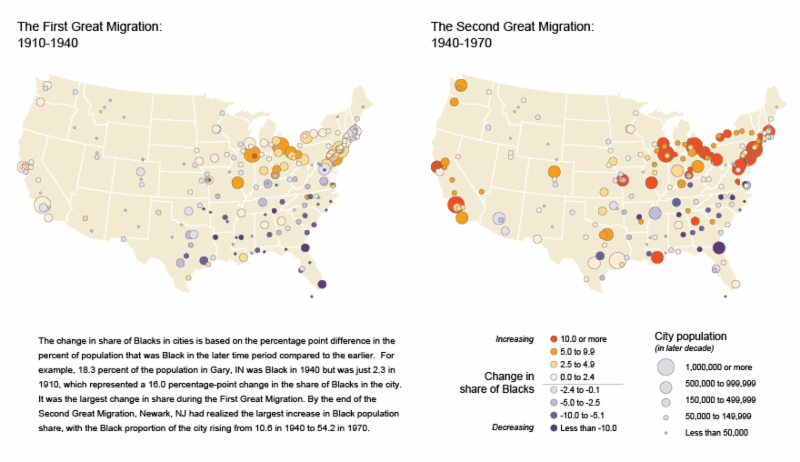 800×462
"During this time, a good portion of all black Americans alive picked up and left the tobacco farms of Virginia, the rice plantations of South Carolina, cotton fields in east Texas and Mississippi, and the villages and backwoods of the remaining southern states – Alabama, Arkansas, Florida, Georgia, Kentucky, Louisiana, North Carolina, Tennessee, and, by some measures, Oklahoma. They set out for cities they had whispered of among themselves or had seen in a mail-order catalogue. Some came straight from the field with their King James Bibles and old twelve-string guitars. Still more were townspeople looking to be their fuller selves, tradesmen following their customers, pastors trailing their flocks. …

"Over time, this mass relocation would come to dwarf the California Gold Rush of the 1850s with its one hundred thousand participants and the Dust Bowl migration of some three hundred thousand people from Oklahoma and Arkansas to California in the 1930s. But more remark­ably, it was the first mass act of independence by a people who were in bondage in this country for far longer than they have been free. 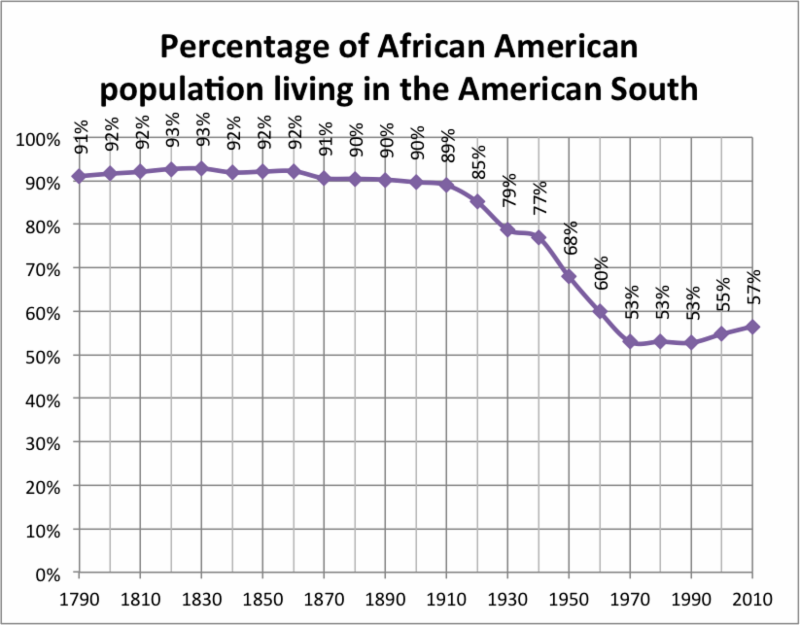 " ‘The story of the Great Migration is among the most dramatic and compelling in all chapters of American history,’ the Mississippi histo­rian Neil McMillen wrote toward the end of the twentieth century. ‘So far reaching are its effects even now that we scarcely understand its meaning.’

“Its imprint is everywhere in urban life. The configuration of the cities as we know them, the social geography of black and white neighbor­hoods, the spread of the housing projects as well as the rise of a well­-scrubbed black middle class, along with the alternating waves of white flight and suburbanization – all of these grew, directly or indirectly, from the response of everyone touched by the Great Migration.”

When I read the title to this thread, I thought you were making a plug for M16 in Henderson [:P]

Agree, I really didn’t realize the scale of the move north.

Agree, I really didn’t realize the scale of the move north.

Why such a surprise. “It is conservatively estimated that 400,000 African Americans left the South in 1916 through 1918 to take advantage of a labor shortage in industrial cities during the First World War.”

Why such a surprise.

I studied engineering, perhaps?? Living the the south nearly my entire life, I saw anecdotal evidence, but I had never put the big picture together.

One of the unexpected effects of this great migration was suburban, then exurban sprawl. Lots of other things were going on, too- automobiles became the main means of transportation, which made a 40 mile commute to work seem reasonable.

There was some white flight, some loss of the tax base in the cities. It made inner city schools blacker, poorer.

Racial developments have always been more subtle than the South. Witness the squabble over the US open in Shoal Creek, years ago- they had no black members ,and the CEO was a fool along the lines of Bull Connor, with no sense of how he looked, and how they would play it.

Almost silently, in the midst of the kerfuffle, Shinnecock Hills, the upscale NYC course, bailed out of the next year’s Open, saying they had a problem with their greens, though the problem was entirely white at the time.

I see they are back on for this year’s Open, so I guess Tiger Woods won’t be the only black man in evidence. They are smarter about PR up that way,but maybe not altogether better people.

Anyway, these numbers play out similarly anywhere you look.

It’s hard to know what, if anything, to do about it, but the development is related to this migration- a law of unexpected consequences, I guess.

I have an idea, probably too romantic, that the US public school system was once among the best in the world. I once looked over a final exam for 8th graders in the Midwest from the 1890s- it required quite bit of knowledge.

Almost everybody went to public schools, everybody except the children of the urban very rich. It was one of the common experiences that held us together.

Those days are gone. There is a general perception that public education has failed in the main, with a lot of social and political overlay, resulting in all these charter schools, privates schools to escape from the problem, and now these magnet schools, to allow smart, motivated kids to rise farther and faster, which I think is great. But possibly there is another unintended consequence- which is to say the hell with everybody else. My kids got what they need, I don’t need to care about anyone else. It’s an Amertican characteristic, or maybe a human one.

It is interesting to note. Many of the educational reforms that irritate everybody arose in New York, where, as the article mentions, there are a lot of million dollar neighborhoods with adjacent low income high rises. I admit to a small guilty pleasure at seeing them squirm.

We used to be able to segregate by zoning- still do, for the most part. But in the big city boroughs, it is harder, so their slip is showing.

This evolving opt-out school system is showing that, doing its part.

One of my favorite things about America is our differences- in origin, in perspective, in outlook.That blending has always been inspiring.

But it’s more awesome than pretty.

Melting pot was always a truer analogy than the poets made it sound.

We are, and always have been, an amalgam of groups that hated each other, that had to be cooked, obliterated at 2000*C to blend into a new alloy. Or marry out. Nothing like a black or lesbian grandchild to make you take a fresh look at the old ways.

It’s getting harder over time, more class driven. The spread between us is more about money than ever before…or maybe I’m just getting old and cranky.